When Linda* came to California six years ago, becoming homeless wasn’t part of her plan. 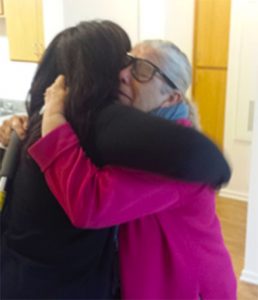 She was a nurse in Texas. However, when she relocated to California her license wasn’t valid in this state. To land a nursing job here would cost $8-10,000 and two years of additional schooling. Knowing she had to work, Linda was trained by Los Angeles County in mental health services and working with those who had Alzheimer’s Disease. For six years she worked as a caregiver and didn’t stop until December 12, 2013.

That’s the day her life changed in ways she could never have imagined.

She took a horrible fall down a flight of stairs, sustaining numerous severe injuries. Unable to work, she no longer had an income sufficient to pay rent. She was eventually evicted from her apartment. Linda was now homeless and hopeless.

What she didn’t know is that there was a new effort being formed through the Housing for Health program between Los Angeles Department of Health Services, AMCAL, FPI Management, Brilliant Corners (the nonprofit contracted to coordinate the HFH program), and LifeSTEPS. Through this partnership Linda was identified as a good candidate – and LifeSTEPS social worker, LaKisha Collman, made outreach to her.

LaKisha helped her complete an application to the Housing for Health program (HFH). The HFH program strives to end homelessness in Los Angeles County, while reducing the inappropriate use of expensive health care resources and improve health outcomes for vulnerable populations. Administered by Los Angeles County, the program provides permanent supportive housing and specialized care to homeless people with complex physical and behavioral health conditions. “Linda was the perfect candidate for this program. It was evident that her health was suffering so we worked as quickly as possible to get her into the program.” LaKisha said.

“I was sleeping in my car.” Linda said. She parked in hospital parking lots and other places where she would feel safe. Still recovering from the severity of her injuries, her sleeping arrangement made her condition worse. “I have seven degenerated bones in my back and sleeping in my car has made it worse. I’m sometimes in so much pain I can’t sleep.”

Not long after preparing her application, LaKisha gave Linda some good news: she had been referred to Broadway Villas – an AMCAL affordable housing complex that is a part of the HFH program. Linda, understandably, was quite excited. “I went to see the property and it was beautiful. I knew I was going to be blessed. It was like a dream!”

“There are a lot of heroes in this program,” says Beth Southorn, Executive Director for LifeSTEPS. “The housing part of this program can be complex. With AMCAL agreeing to set aside a number of rent-controlled units at Broadway Villas that fit the program guidelines, they’ve made the transition from homelessness to being housed much easier.” She also cites that all of the partners have done amazing work to make dreams like Linda’s come true.

“What I also find extraordinary is that people like Linda, who have experienced great difficulties, are definitely up to the challenge of making significant positive changes in their lives. They just need a little help.” Southorn says.

LifeSTEPS has housed total of 16 people at Broadway Villas since early 2015. Each unit is fully furnished, and residents will receive ongoing social service support from LifeSTEPS to help make their transition as successful as possible. Linda was one of eight people who moved into Broadway Villas on January 28, 2015. LifeSTEPS has helped a total of 40 people transition into permanent homes through the HFH program at two AMCAL communities.

Overcome with emotion, Linda exclaimed, “Do you know where I was sleeping on the 15th of this month? Outside on the street in front of this building! I’ve been waiting for this day for so long. LaKisha is one of God’s angels and I feel so blessed.”

*Please note:  Some resident names have been changed.