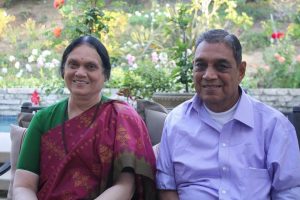 When Vik and Leah* arrived in the U.S. several years ago, they were looking forward to spending their retirement years close to their adult children. Spending most of their lives in India, they were excited to finally have their family back together in a country that they had always dreamed of living in. Once they arrived, they found a home in an affordable housing unit where they were able to work during their final years before retiring in order to save up money.

Although they did not have much, they were proud of their home and their new community. They made it a point to attend and participate in all of the socials and activities taking place at the property as well as attending classes provided by LifeSTEPS. They formed friendships with their new neighbors and always offered to volunteer for all of the community events taking place.

As great as life was, things took a drastic turn when Vik’s life was suddenly changed without warning. As Vik was going on about his day, he noticed a sudden numbness and weakness on the left side of his body. Thinking it was due to tiredness, Vik continued on with his day until the symptoms became so severe that he could not move his left arm and leg. Frightened, he called out to Leah who immediately dialed 911.

After sitting in the waiting room with her children for what felt like hours, the family was finally told by a doctor that Vik had suffered a stroke. His condition was so severe that the stroke left him partially paralyzed on one side of his body. As shocking and difficult as the news was, Leah remained strong for both Vik and her children.

As the weeks went by, Leah spent the majority of her day caring for Vik. Although her children helped as much as they could, the exhaustion and constant worry began to take a toll on Leah. Worried for both their health, Leah called her Director of Social Services, Yawo, hoping to explore different resources to help lighten the load.

Knowing the struggles that both Leah and Vik were dealing with, Yawo referred them to In Home Support Services. She knew that although Leah was strong and self-sufficient, she couldn’t care for Vik on her own. Helping them with their paperwork and guiding them through the process, Yawo made sure that she was there for them beyond the application process.

With everything being accepted and approved, Leah and Vik welcomed in a new home care worker that they both felt comfortable around. Because of the added help, Leah is now able to focus on other things around the house without constantly worrying about Vik. With the support of IHSS and LifeSTEPS, the couple continues to live the best life they could.