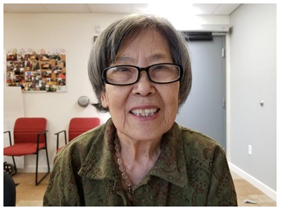 When Ann* moved into her new apartment last June, she did not expect to experience the struggle that she did. After being on the waiting list for a year, Ann and her husband David* were ecstatic when an opening for a one-bedroom unit became available. To Ann and David, moving into an affordable housing unit meant self-sufficiency and stability, which is what they both have always strived for.

One morning, as she was exiting the BART station on her way home from running her daily errands, she had noticed that the usual bus she takes back to her apartment was not stopping. Afraid that the driver did not see her, she began to run when all of a sudden, she missed a step on her way down the stairs. Crashing onto the ground, Ann was left with an injury she never saw coming.

After being rushed to the hospital, Ann was told that she had broken her front teeth and had incurred a gum infection. Being told that she had to call the Santa Clara Valley Transportation Authority to file a claim, Ann became overwhelmed with not only her physical injury, but the confusing application of getting the process started.

Ann and her husband called their Director of Social Services, Qianying, in the hopes that she could help them fill out the paperwork involved. Once Qianying sat down with the couple, she carefully went through each form and helped with the calls that needed to be made. Not only did this put Ann at ease, but it also gave her the physical and mental support she needed to help her get through her ordeal.

Over time, as Ann began to heal, she developed a fear and anxiety of leaving the apartment. With the traumatic injury affecting her daily life, Qianying knew that she needed to help Ann get used to her surroundings and feel comfortable being outside. Qianying suggested that the couple both attend small community gatherings and get familiar with the new property they now called home.

After a few weeks of small outings, Ann slowly began to feel comfortable being outside of her apartment. She began to take daily walks around the property where she was able to meet her new neighbors and explore the community. With such a warm welcome from the other residents, Ann slowly regained her confidence.

Despite a traumatic injury, Ann persevered. Because of the help of Qianying and the LifeSTEPS community, Ann was able to get her life back. She is now finally able to enjoy her new home and move forward with her life. “I am very thankful that LifeSTEPS is here to help me. With the assistance they provided, I am finally feeling better,” Ann says.

Planning for a Brighter Future
Scroll to top