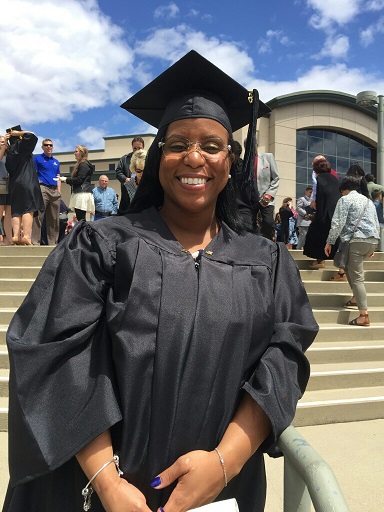 Being a young veteran returning back into civilian life due to an injury, Rita didn’t expect to experience all of the hardships that she did. At the time, back in 2012, as a single mother of three, Rita struggled to stay afloat despite landing her dream job at Stanford University. Because of the high cost of living and rising rent prices, Rita’s salary was simply not enough to make ends meet. After falling too far behind, Rita and her family found themselves homeless.

Moving from shelter to shelter, Rita did everything in her power to get her family out of that situation. Despite slowly getting back on her feet and finding stable housing, Rita continued to struggle financially. During a random inspection with the Housing Authority, she was introduced to the Family Self-Sufficiency (FSS) program. Expecting to get a limited amount of help, Rita was pleasantly surprised when she met with her Case Manager, Linda, who not only provided her with much-needed support, but also empowered her to continue reaching for success.

After officially enrolling in the program, Rita was immediately connected to resources that would help her and her family not only save money, but provide a path to success for her children. Working together with Linda, Rita came up with a list of goals she hoped to accomplish while in the program, which included securing a vehicle, paying down her debt, and ensuring that her children received a good education. Another goal she had was to go back to school and earn her bachelor’s degree, something she never thought she’d be able to do.

Finally on the right path to self-sufficiency, Rita was connected to the Peninsula Family Service’s Ways to Work program where she found an affordable vehicle. She also enrolled in the Women’s Achievement Network and Development Alliance where she started a savings account and participated in financial workshops regularly.

What Rita thought was a program that would provide temporary relief, she found that the FSS program became a catalyst that started a life-changing journey. Today, she holds a B.A. degree from William Jessup University, continues to work at Stanford University with a better paying position, and is looking forward to seeing her son graduate from University of California, Los Angeles.

“Through this beautifully arranged program, what I have come to understand is that we are all created to assist one another in bettering ourselves. To be held accountable by someone, and to be led and guided towards future successes,” Rita says.

Back to Programs & Services
Client Assistance